The theft of trade secrets has always been a deep concern of foreign companies thinking of doing business in China, whether it be sharing protocols with a manufacturing partner, providing technology details to a potential investor, or sharing results from an R&D collaboration. How can businesses ensure that employees do not steal secrets and share them with others, such as competitors? If such stealing occurs, what are the consequences?

Recently, China chose to highlight this topic in one of its Top 50 Representative IP Cases.

Hua Xing v. Lin, Ye, and Zheng (2018 粤13刑终361号) emphasizes the criminal nature of violating and misappropriating trade secrets and the possible consequences for those who engage in this practice. 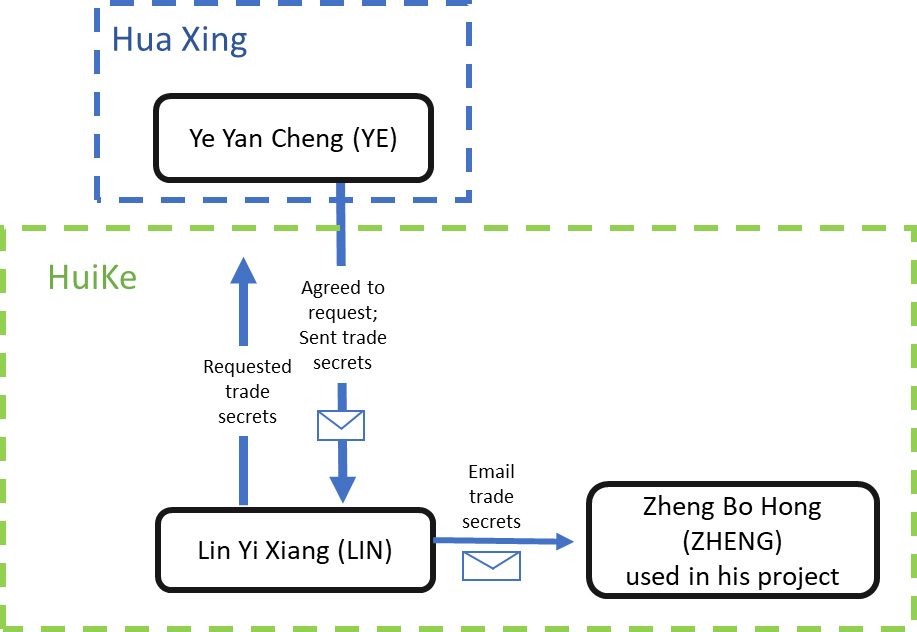 Both YE and LWC agreed and shared the requested information while still employed at Hua Xing.

Although both clearly shared data, it’s interesting to see how the courts determined damage amounts based on the nature of how much information was taken, as well as how it was shared and used. The details of the story matter in this case.

The Intermediate Court of Huizhou ruled the following:

YE, who shared company trade secrets with LIN upon LIN’s request, was found guilty of violating trade secrets and was sentenced to three years in prison and fined 10,000 yuan.

LIN, who initiated the request to YE and LWC for company trade secrets, and then shared the misappropriated trade secrets with Hui Ke employees, was found guilty of violating trade secrets. Lin was sentenced to three years and six months in prison, and fined 30,000 yuan.

According to Chinese Criminal Law, theft of trade secrets is a serious criminal offense, punishable by up to 7 years in prison. The degree of seriousness is determined by weighing a complex set of factors to determine the amount of economic loss caused. A “significant” economic loss of more than 500,000 RMB is punishable by a prison sentence of “not more than three years”, whereas a “particularly serious” loss of more than 2.5 million RMB can result in a prison sentence of three to seven years.

In this case, it seems quite clear that when determining criminal liability, LIN’s malicious intent to initiate the stealing of trade secrets from another company and to actively share those secrets with a competitor company was considered worse than merely agreeing for a request to share or just receiving and using the information, even though the loss caused by LIN (~11 million RMB) was determined to be less than that by ZHENG (~25 million RMB).

As a side note, this case also demonstrates to companies that having the right IT systems in place to quickly identify the theft of trade secrets is of utmost importance. Ideally, the IT systems would have several mechanisms that would discourage or not even allow such quick and easy transfer of information. In this case, Hua Xing was able to easily check its company e-mail records to find proof that Lin had sent a large volume of documents to his personal email. Ideally, Hua Xing’s IT systems would have had mechanisms that would disallow such types of information transfer.

In this case, the criminal liabilities were quite high. Additionally, a separate civil suit was also filed. It will be interesting to see how the court determines the amount of compensatory damages that Hua Xing is entitled to receive.

The fact that China decided to highlight this case as a Top 50 representative case demonstrates to the public how seriously China treats the misappropriation of trade secrets. A multi-year criminal jail sentence attached to the act of emailing some company information to an ex-colleague (something that may be common practice) most certainly sends a strong message to the public.

We will keep you updated for further development. Stay tuned for more important updates on IP law in China.

Eagle IP are experts in patent law and we offer a one-stop service for your global IP needs.

This article is for general informational purposes only and should not be considered legal advice or a legal opinion on a specific set of facts.